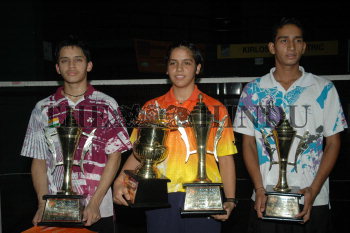 Caption : (From left) Andhra Pradesh's P. Kashyap (boys under 19), Saina Nehwal (girls under 16 and under 19) and Madhya Pradesh's Abhimanyu Singh (boys under 16), winners of the singles titles in the respective divison in the Union Bank all-India junior ranking badminton championship in Bangalore on July 23, 2005. Photo: K. Murali Kumar