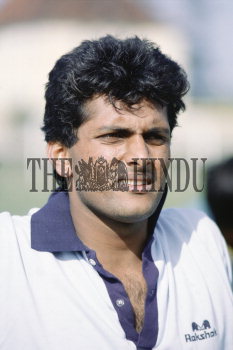 Caption : Indian goalkeeper Ashish Ballal snapped without his protective gears during the team's training session before the men's hockey classification match for the third and fourth places between Argentina and India during the Inter Continental Cup 1993 at Poznan, Poland, on August 29, 1993. Photo: Vino John