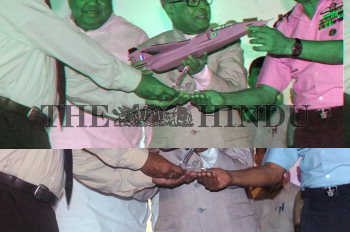 Caption : Union Defence Minister Pranab Mukherjee receiving a memento (model of JAGUAR) from HAL Chairman Ashok K. Baweja (left) and from the Air Chief Marshal S.P. Tyagi (right) while the Chief Minister of Karnataka N. Dharam Singh look on at the handing over of JAGUAR Aircraft and Lakshaya to Indian Air Force, at HAL Airport in Bangalore on July 15, 2005. Photo: V. Sreenivasa Murthy