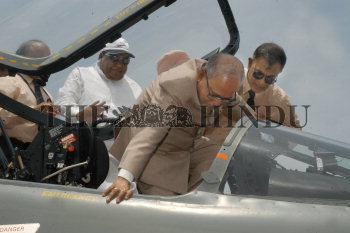 Caption : The Union Defence Minister, Pranab Mukherjee, trying to sit inside the cockpit of a 'JAGUAR' aircraft with the assistance of the Hindustan Aeronautics Limited (HAL) chairman, Ashok K. Baweja, as the Karnataka Chief Minister, N. Dharam Singh, looks on during the handing over of JAGUAR and Lakshya aircrafts to Indian Air Force, at HAL airport in Bangalore on July 15, 2005. The Indian Air Force took delivery of nine upgraded JAGUAR combat aircraft and pilot-less target aircraft Lakshya from the Hindustan Aeronautics Limited. Photo: V. Sreenivasa Murthy