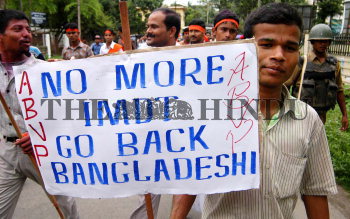 Caption : Activists of Akhil Bharatiya Vidarthy Parishad (ABVP) are taking out a rally demanding to deport all the illegal Bangladeshi nationalists from Assam State after the Supreme Court's judgment to strike down the IM(DT) Act in Guwahati on July 13, 2005. According to this judgment the illegal Bangladeshis who have come to Assam after 1971 will have to leave India. At present there are more that fifty lakh illegal Bangladeshis in Assam State alone. The Supreme Court struck down the controversial Illegal Migrants (Determination through Tribunal) Act operating in Assam to identify Bangladeshis. Meanwhile the Minority fronts of Assam has called for a 24-hour Assam bandh starting from July 14, 2005 in protest against the Apex Court’s judgment. Photo: Ritu Raj Konwar