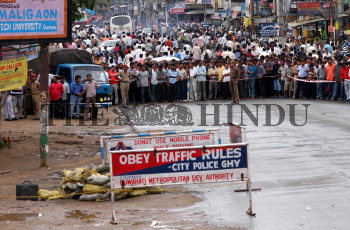 Caption : People wait for hours in the middle of the road after an unclaimed suitcase was found lying on the roadside at Maligaon area in Guwahati on June 20, 2004. The suitcase was suspected as a bomb and was later defused by the bomb squad. In an earlier incident a bomb planted by ULFA militants exploded in the State Assembly complex. ULFA militants and an army personnel were killed in two separate incidents in Nalbari district of Assam. ULFA has warned the Assam State government to withdraw all counter insurgency operations against them as efforts have been made in various levels to hold talks with the Indian government. Photo: Ritu Raj Konwar