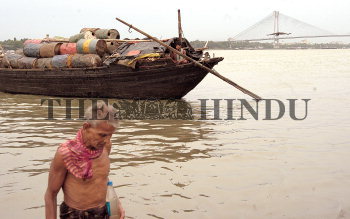 Caption : An old man carrying "Gangajal" after taking bath in Hoogly River at HOWRAH in Kolkata on June, 20, 2005. It is already a known stroy that the longest river Ganges has been polluted by the waste over a period of time but the belief of the `Holy Gangajal' exist strongly in the people's mind. The river is the lifeline of several States in the country. Photo: A. Roy Chowdhury