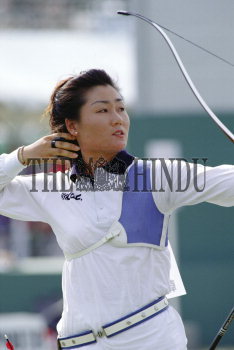 Caption : Korea's Lee Eun-Kyoung snapped after releasing her arrow towards the target in the women's Individual FITA Olympic Round in archery at the Asian Games 1994 in Hiroshima, Japan on October 8, 1994. She won the gold medal in the event. Photo: V. Sudershan