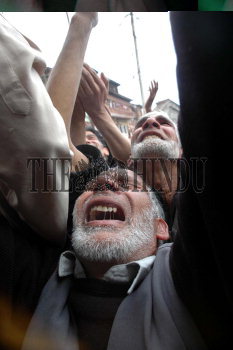 Caption : Kashmiri Muslims offer FRIDAY PRAYERS on the road near the shrine of Shyakh Abdul Qadir Jeelani (R.A), commonly known as Peer Dastageer on his death anniversary in the Khanyar locality of Srinagar, the summer capital of Indian-held Kashmir, on May 20, 2005. Thousands of devotees thronged to the shrine on the eve of 806th death anniversary of Jeelani whose tomb is in Baghdad. Photo: Nissar Ahmad