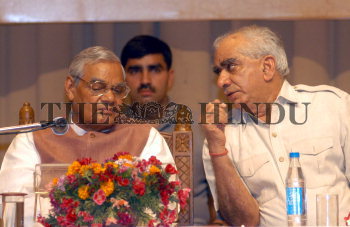 Caption : Former Prime Minister, Atal Bihari Vajpayee and Jaswant Singh during a seminar on "Pokhran-Present Perspective" organised by the BJP on the Pokharan's Anniversary at Sai Centre in New Delhi on May 11, 2005. Photo: R.V. Moorthy