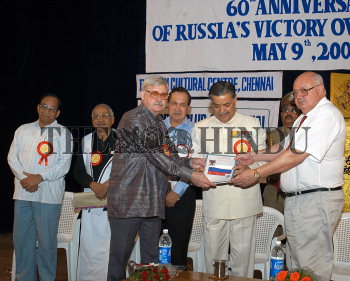 Caption : M. M. Lakhera, the Lt. Governor of Pondicherry (second from right) is receiving a souvenir at a function dedicated to the 60th anniversary of Russia's Victory over Fascism in Chennai on May 10, 2005. Looking on (from left) are: A. M. Gopu, Editor, Janasakthi, K.Veeramani, President, Dravidar Kazhagam, Alexei V. Solodov, Director, Russian Cultural Centre, N. Ram, Editor-in-Chief, The Hindu and Mikhail M. Mgeladze, Consul-General of the Russian Federation in South India. Photo: S. R. Raghunathan