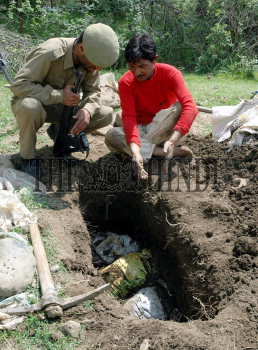 Caption : Police and Forensic specialists dig out the remains of a dead body for the DNA Test of a suspected militant at a graveyard in Harwan Srinagar, on May 02, 2005. Police said,that the suspected militant was killed during an encounter with security forces at TRC on April 06, 2005. Photo: Nissar Ahmad l