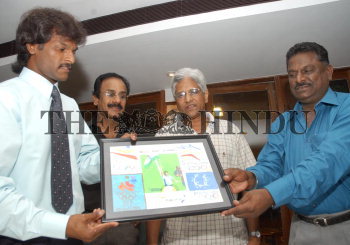 Caption : Hockey Olympian, Dhanraj Pillay was felicitated by the MADRAS CRICKET CLUB (MCC), one of the oldest CLUBs in the city, in recognition of his contribution to the sport. Dhanraj receiving photograph from Olympian V. Baskaran at the function on April 25, 2005. Also seen are Rajiv Reddy (second left) and Prem Kumar Khara (MCC-CLUB,Vice President). Photo: N. Sridharan