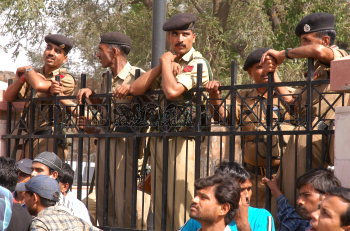 Caption : Security personnel keep vigil outside the Ferozeshah Kotla stadium on the eve of Pakistan President Pervez Musharraf's visit to witness the Sixth One Day International cricket match between India and Pakistan in New Delhi on April 16, 2005. Photo: S. Subramanium