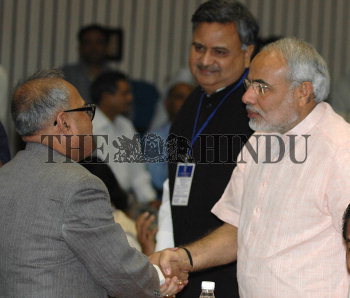 Caption : The Union Defence Minister, Pranab Mukherjee, with the Gujarat Chief Minister, Narendra Modi (ext right) and the Chhattisgarh Chief Minister, Raman Singh (second right), at the Chief Ministers Conference on the 'Internal Security and Law and Order', at the Vigyan Bhawan in New Delhi on April 15, 2005. Photo: Rajeev Bhatt