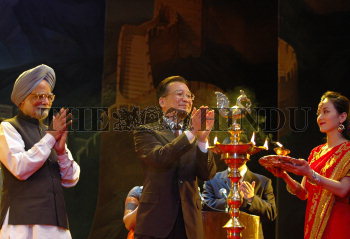 Caption : The Chinese Prime Minister Wen Jiabao and Prime Minister Manmohan Singh during inauguration of the Cultural Festival of China organised jointly by Indio-China cultural councils in New Delhi on April 11, 2005, to mark the 55th anniversary of the establishment of diplomatic relations between India and China. Photo: Rajeev Bhatt