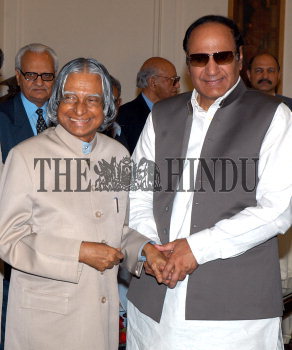 Caption : President, APJ Abdul Kalam (left) shakes hANDs with former Pakistani Prime Minister AND Pakistan Muslim League (PML) President, Chaudhry Shujaat Hussain, prior to a meeting at Rashtrapati Bhavan in New Delhi on March 29, 2005. Hussain is on a three day visit to India during which he will meet with political AND business leaders. Photo: Shanker Chakravarty