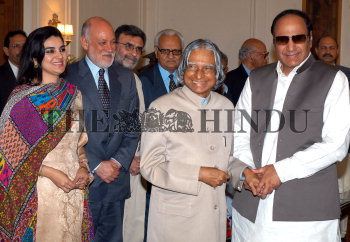 Caption : President, APJ Abdul Kalam (center) shakes hANDs with former Pakistani Prime Minister AND Pakistan Muslim League (PML) President, Chaudhry Shujaat Hussain (right) along with his delegation AND Pakistan High Commissioner to India Aziz Ahmed Khan (2nd left), prior to a meeting at Rashtrapati Bhavan in New Delhi on March 29, 2005. Hussain is on a three day visit to India during which he will meet with political AND business leaders. Photo: Shanker Chakravarty