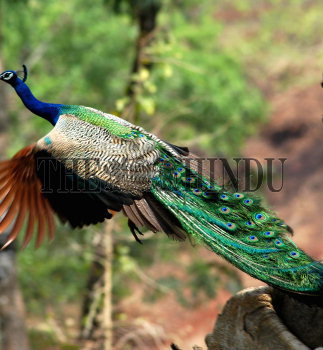 Caption : A Peacock in flight at the Manas National Park situated in the Indo-Bhutan border on March 21, 2005. Peacock in wild is found only along the foot hills of Indo-Bhutan International border and Manas National park (also a World Heritage site and Tiger project) has the highest number of wild peacock in northeast India. The park has almost destroyed by the northeast insurgents groups in last ten years, who used this place as their safe route between India and Bhutan. But the recent interest of the Indian government and NGO's has got a new life in it and the birds and animal population has started increasing once again. Photo: Ritu_Raj_Konwar