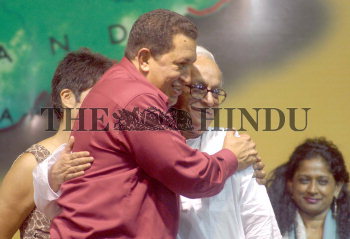 Caption : The President of Venezuela Hugo Chavez greets the crowd while Mr. BUDDHADEB BHATTACHARJEE (left), CM of West Bengal, tries to talk to the President during a civic reception given to him in Kolkata on March 05, 2005. On a four day State visit to India, Mr. Hugo Chavez said that the era of cheap global oil prices was over and that prices are likely to remain in the $40-50 per barrel band. Photo: Parth Sanyal