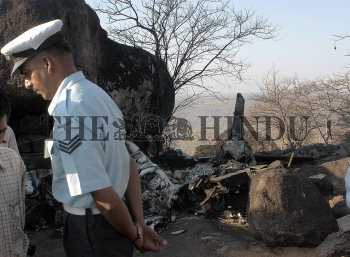 Caption : An Air Force officer passes the wreckage of the aircraft 'HPT 32 Deepak' at Mamidigutta near Pambanda village in Shivampet mandal of Medak district in andhra Pradesh on March 4, 2005. The trainer aircraft of the Indian Air Force Academy crashed killing the trainee pilot Sparsh Rana. Photo: A. Roy Chowdhury