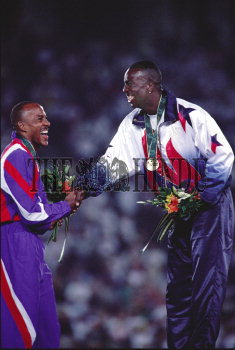 Caption : The gold medal winner Michael Johnson of United States celebrates with silver medalist Frankie Fredericks of Namibia on the podium during the presentation ceremony of the men's 200 metres event in the Atlanta Olympics on August 2, 1996. Michael Johnson won the gold medal with a new World Record. Photo: Vino John