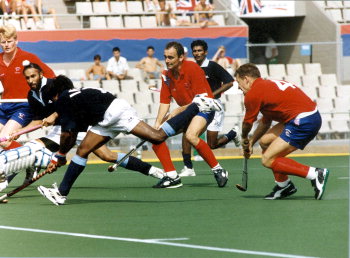 Caption : Indian striker Dhanraj Pillay's attempt being thwarted by Great Britain goalkeeper Sean Rawlands (not in pic) during the hockey match between Great Britain and India at the Barcelona Olympics on July 30, 1992. Photo: S. Kothandaraman