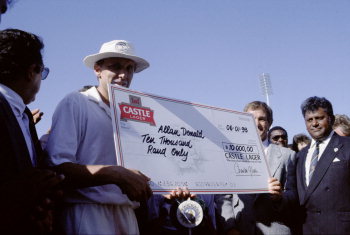 Caption : SOUTH AFRICA's Allan Donald, who was adjudged 'The Player of the Series', receives a cheque for ten thousand rands at the presentation ceremony after the fourth and final cricket Test match between India and SOUTH AFRICA at Newlands in Cape Town, SOUTH AFRICA on January 6, 1993. SOUTH AFRICA won the four-Test series 1-0. Krish Mackerdhuj, President of UCBSA, is also seen. Photo: V.V. Krishnan