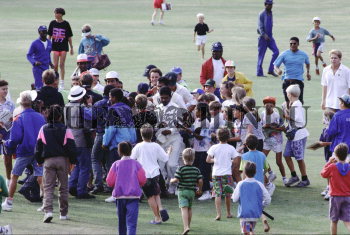 Caption : South African batsman Kepler Wessels, Indian cricketers Mohammed Azharuddin and Pravin Amre are being surrounded by a group of spectators after the end of the third cricket Test match between India and South Africa at St. George's Park in Port Elizabeth, South Africa on December 29, 1992. South Africa won the match by nine wickets with a day to spare. Photo: V.V. Krishnan