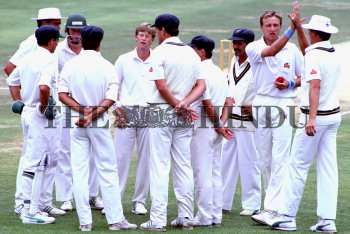 Caption : Allan Donald of SOUTH AFRICA celebrates with a teammate after taking a wicket as other team members engaged in a discussion during the third cricket Test match between India and SOUTH AFRICA at St. George's Park in Port Elizabeth, SOUTH AFRICA on December 29, 1992. Photo: V.V. Krishnan