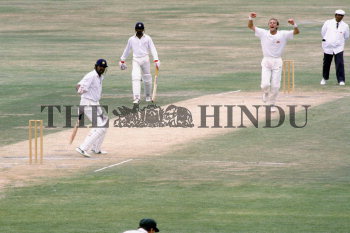 Caption : SOUTH AFRICAn bowler Allan Donald celebrates after Kapil Dev edged a catch to Brian McMillan (not in picture) in the third cricket Test match between India and SOUTH AFRICA at St. George's Park in Port Elizabeth, SOUTH AFRICA on December 29, 1992. Kapil Dev was the last man to get out and SOUTH AFRICA won the match by nine wickets. Photo: V.V. Krishnan