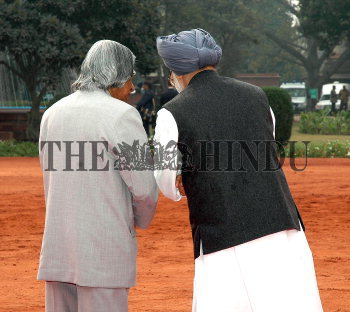 Caption : The President A.P.J. Abdul Kalam and the Prime Minister Manmohan Singh (right), await the arrival of the Bhutan King Jigme Singye Wangchuk (not in pic), during a CEREMONIAL RECEPTION at the Rashtrapati Bhavan in New Delhi on January 25, 2005. The Bhutan King will be the chief guest at the Republic Day parade on January 26, 2005. Photo: Anu Pushkarna