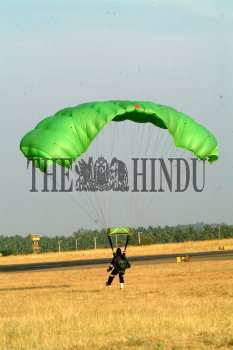 Caption : Ramya Ramesh lands during a parajumping programme at the Sulur Air Force base in Coimbatore on January 24, 2005. Two civilians were among the many who participated in the annual multi-adventure camp organised by the Directorate of Air Force Adventure at the Air Force station, Sulur. The camp is meant to motivate people, especially women, to join the armed forces. This year, participants from the Air force, Navy and the Army showcased the art of skydiving, paramotor flying, parasailing and microlight flying. Photo: K. Ananthan