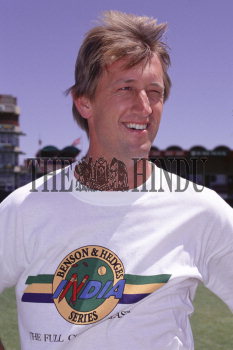 Caption : Craig Matthews of South Africa sports a smile as he poses for a photograph during his team's practice session at Springbok Park before the fifth one day international cricket match between India and South Africa in Bloemfontein, South Africa on December 15, 1992. Photo: V.V. Krishnan