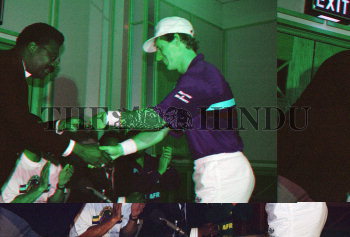 Caption : SOUTH AFRICAn cricketer Andrew Hudson, who scored a century, receives the Man of the Match award from Match Referee Clive Lloyd at the presentation ceremony after the fifth one day international cricket match between India and SOUTH AFRICA at Springbok Park in Bloemfontein, SOUTH AFRICA on December 15, 1992. SOUTH AFRICA won the match by eight wickets. Photo: V.V. Krishnan