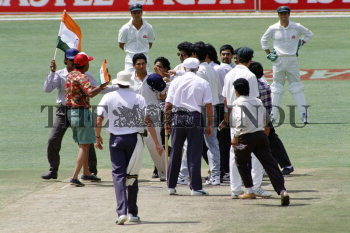 Caption : JOHANNESBURG, 28/11/1992: INDIA IN SOUTH AFRICA: A handful of Indian cricket fans in SOUTH AFRICA with Indian flags invade the pitch and congratulate Sachin Tendulkar on his century as SOUTH AFRICA's Kepler Wessels and wicketkeeper Dave Richardson watch the happenings during the Second cricket Test match between India and SOUTH AFRICA, at New Wanderers in Johannesburg, SOUTH AFRICA on November 28, 1992. Photo: V.V. Krishnan