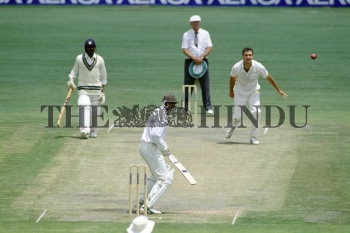 Caption : Indian skipper Mohammed Azharuddin about to be caught by Loius Koen (not in picture) off the bowling of Tertius Bosch, watched by umpire CYRIL Mitchley and non-striker Pravin Amre during the four-day cricket match between India and SA Board President's XI at Centurion Park in South Africa on November 7, 1992. Photo: V.V. Krishnan