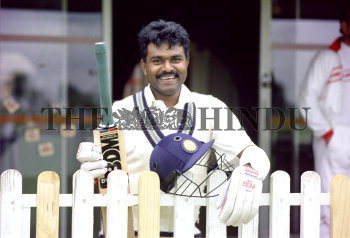 Caption : Indian batsman Pravin Amre is all smiles as he strikes a pose with his bat and helmet near the pavilion during the four-day cricket match between India and South African Invitational XI at Springbok Park in Bloemfontein on November 21, 1992. Pravin Amre scored a century in the match. Photo: V.V. Krishnan