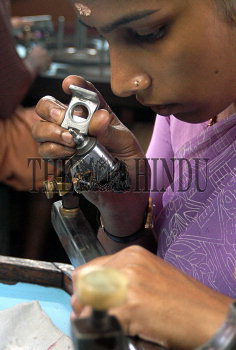 Caption : A DIAMOND cutter at work in a cutting unit in Kerala: DIAMOND workers in Kerala are in dire straits. This skilled workers in DIAMOND cutting and polishing units spread over five Panchayats in Kerala's Thrissur district are in serious crisis following competition frin their counterparts in Gujarat and Maharashtra where wages are low. This has resulted in sharp decline in the supply of raw materials. The number of workers which used to be over 25,000 has now dropped to around 5,000 and they are also on their way out. The number of DIAMOND cutting units also dropped from 300 to 70. Intermittant strikes, high power cost apart from higher wages have forced several units to pull down its shutters. In addition, modernisation involving huge investments has also done its role. Photo: K.K. Mustafah 5-11-2004