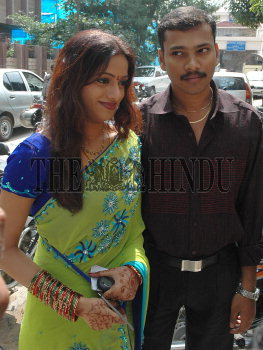 Caption : Actress and popular TV ANCHOR Uday Bhanu, along with her husband Vijay, arriving to address a press conference in Hyderabad on October 27, 2004. A controversy arose when she sought city police protection as her family was allegedly against her love marriage with Vijay at the Arya Samaj Mandir on October 25th. Photo: Mohammed Yousuf