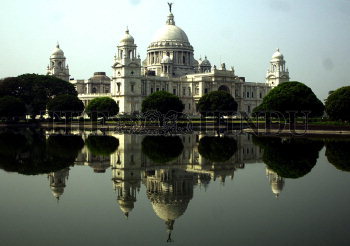 Caption : A view of the famous Victoria Memorial Hall in Kolkata, the capital of the eastern Indian State of West Bengal. The Victoria Memorial Hall was built between 1906 and 1921 by the then Viceroy of India, Lord Curzon, who wanted to build a dream memorial for the late Empress. It is fully made of white marble. It took nearly two decades and around one crore rupees to complete it. It has a wonderful bronze statue of the Empress, a beautiful garden surrounding it and a museum and an art gallery inside it. A light and sound show is a major attraction daily in the evenings.