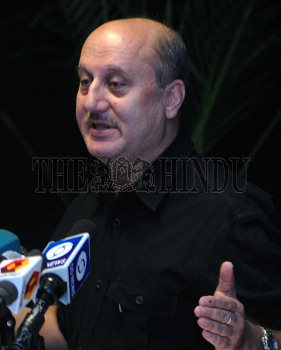 Caption : Anupam Kher, actor and ousted Chairman of the Central Board of Film Certification (CBFC), addressing a press conference in New Delhi on October 14, 2004. After failing to secure the resignation from Anupam Kher, the Union Government on October 13th appointed the veteran actress Sharmila Tagore as the new Chairperson of CBFC. Photo: Anu Pushkarna