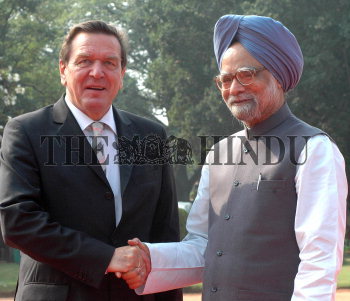 Caption : The Prime Minister Manmohan Singh, with the German Chancellor Gerhard Schroeder during the CEREMONIAL RECEPTION at Rashtrapati Bhavan in New Delhi on October 07, 2004. Schroeder, on a two-day visit to India, is likely to press for closer economic ties between Asia's fourth-largest economy and his country during talks with Indian leaders. Photo: Anu Pushkarna