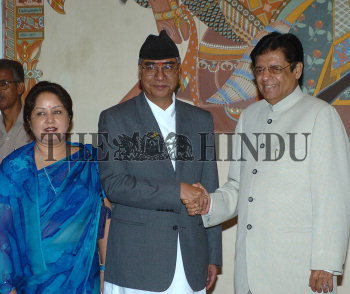 Caption : The Union Minister of State for External Affairs E. Ahamed (right), receiving the Prime Minister of Nepal, Sher Bahadur Deuba, on his arrival at the Indira Gandhi International airport in New Delhi on September 8, 2004. Also seen is the Nepal Prime Minister's wife, Arzu. The Nepalese Prime Minister is on a five-day visit to India to hold talks with the Indian Prime Minister, Manmohan Singh (not in pic) and to convey Kathmandu's concerns over Maoist insurgency. Photo: Shanker Chakravarty