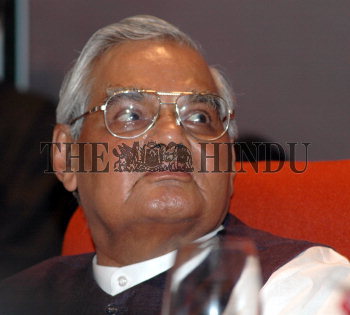 Caption : Former Prime Minister Atal Bihari Vajpayee during the release of the book "Politics of Coalition- Gathbandhan Ki Rajniti" in New Delhi on September 02, 2004. The book is a compilation of Mr. Vajpayee's 109 speeches in Parliament with a chapter on coalition politics, "I recollect" penned by him. The book has been compiled by well-known author Narayan Madhav Ghatate. Photo: Anu Pushkarna