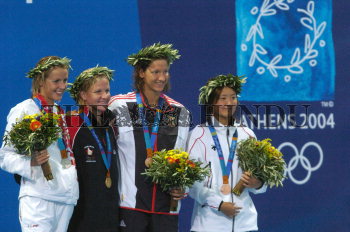 Caption : Kirsty Coventry of Zimbabwe(second from left) who won gold in the women's 200m backstroke event at the Olympic Games 2004, in Athens on August 20, 2004. Also seen are Stanislava Komarova of Russia (silver, ext. left) and bronze medallists Antje Buschschulte of Germany and Reiko Nakamura of Japan. Photo: Vino John