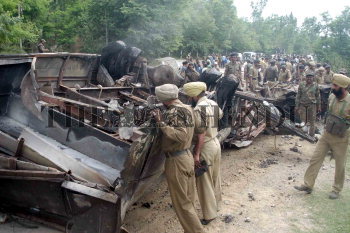 Caption : Security personnel checking the mangled remains of the bus that was blown up in a mine blast in Lower Munda on the Srinagar Jammu National Highway, on May 23, 2004. Twenty eight persons, including 15 BSF soldiers, were killed and nine injured in the blast. The bus was carrying 33 BSF personnel. They had left the Pantha Chowk base, near Srinagar, at 8.30 a.m. All the jawans had taken leave and were on their way home, with some of them accompanied by their families. The Hizb-ul Mujahideen has owned responsibility for the mine blast. A spokesman of Hizb rang up and said that the attack was to avenge the killing of three top Hizb commanders by the security forces recently. Photo: Nissar Ahmad