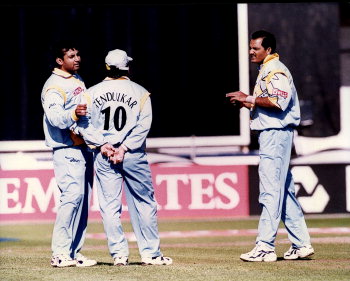 Caption : Indian captain Mohammed Azharuddin in a discussion with his teammates Ajay Jadeja and Sachin Tendulkar during the Super Six match between India and Pakistan at Manchester on June 8, 1999 during the Cricket World Cup 1999 held in England. Photo: V.V. Krishnan