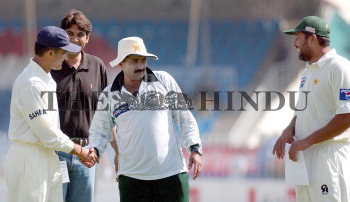 Caption : India's Sourav Ganguly being congratulated by Javed Miandad after India won the toss as Inzamam ul Haq looks on, on day one of the third Test between India and Pakistan at the Pindi cricket stadium in Rawalpindi, on April 13, 2004. Photo: S. Subramanium