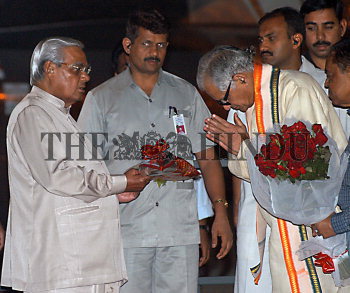 Caption : The Prime Minister, Atal Bihari Vajpayee, being received by the Uttar Pradesh Governor, Vishnu Kant Shastri, at Amausi airport in Lucknow, on April 14, 2004. Vajpayee will be filing his nomination papers for the Lok Sabha election from Lucknow, on April 15, 2004. Photo: Subir Roy