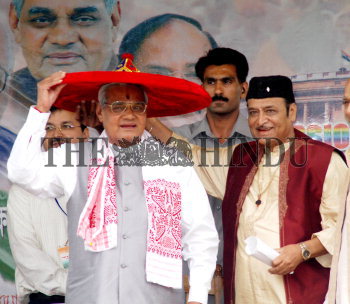 Caption : Dr. Bhupen Hazarika, the BJP candidate for the Guwahati Lok Sabha constituency, welcoming the Prime Minister, Atal Bihari Vajpayee, with a traditional Assamese hat 'japi', during an election rally in Guwahati, on April 06, 2004. Vajpayee launched the BJP election campaigning in Assam on the occasion of the foundation day of the BJP in Guwahati. Photo: Ritu Raj Konwar