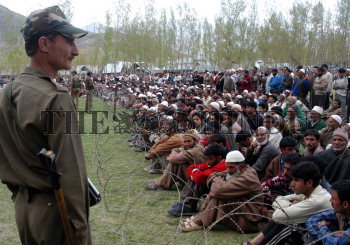 Caption : A security force personnel guarding the crowd during the ruling PEOPLE's Democratic party's convention in Bandipora, on March 28, 2004. The convention was addressed by the PDP President Mehbooba Mufti, and other party leaders. Photo: Nissar Ahmad