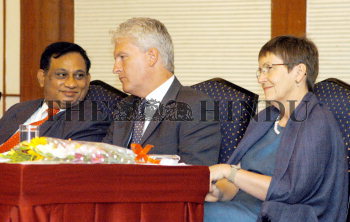 Caption : The British Deputy High Commissioner (South India), Stuart Innes, at the inaugural function of the Visakhapatnam chapter of the Association of British Scholars (ABS) in India on March 22, 2004. It is the 21st chapter of the ABS in India. Also seen are the Director of the British Council (South India), Eunice Crook, and the president of the Visakhapatnam chapter of ABS and the Principal of the AU College of Arts and Commerce, D. Panduranga Rao(left). Photo: C.V. Subrahmanyam