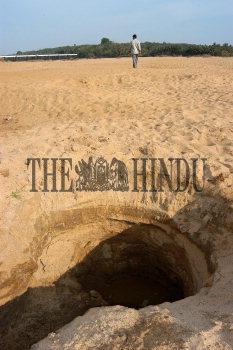 Caption : Pits dug for water on the bed of the river Bharathapuzha, the second largest river in Kerala. As a result of uncontrolled sand mining and massive deforestation in the catchment areas, Bharathapuzha, once a perennial river, dries up in summer. Around 23 lakh people in 103 panchayats depend on this river for drinking water and for irrigation. This year, crops have been damaged in the thouSANDS of acres along the river, due to shortage of water for irrigation. Photo: K.K. Mustafah, 04-03-2004